Magruder woke up Monday to sunny skies and a beautiful, cool Fall day following a steady, strong string of weekend downpours. The Halloween rainstorm could have easily been followed by two straight weeks of rain, and we would not have been surprised. Instead we were greeted by a few of the prettiest days we've seen in a while. We so often feel like we have life figured out, that most things are predictable. But, the world is out to surprise us. 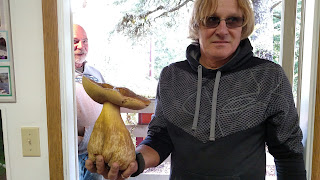 There was a stir in the camp office Monday morning. I heard astonished voices asking if that was what they thought it was. At the main entrance, Rik stood in the doorway holding a mushroom about the size of his head. While doing their rounds near the office, they had found the huge King Bolete near the office walls. He and Mark discussed the best ways to slice it up, and exactly how many people or how many meals it would produce. The recent rains have produced huge mushrooms, edible and poisonous, all over the grounds. You might find them hidden deep in the woods or in the flower beds right next to our most frequented buildings.

The rain was also just about enough on its own to refill Smith Lake which has been historically low after the dry winter and summer. There had been a wide path around the lake of sand that is normally under water. The ground under the boat house was completely dry. With the Halloween rain, water is back up to the bank. All the ground under the boathouse is covered with water, and it isn't just a little.

We figured the lake would be filled again, but we didn't necessarily expect this quickly. One day you are walking next to the lake, the dock sitting on the ground. It starts to rain and you go inside. When the rain subsides and you go back out, it looks like a different body of water. The water color was a muddy brown, rather than its normal clear blue. It felt swollen and thick. I think about the fires of the summer, the lack of rain compared to what is the norm. This is a promising amount of rain to maybe avoid some of those problems. But, we'll need it steady. The mountains will need snow. Still, for today with blue skies and breezy winds overhead, it's nice to see the dock sitting a little higher on the metal posts that go all the way down into the sands at the bottom.

Though in some ways it feels like they just got here, the Fall Outdoor school staff just finished up their last week with us. The feel of outdoor school evenings has really been altered by the end of Daylight Savings Time. Until now, supper took place during daylight and finished right around sunset recently. In the dining hall, the natural light was brighter than the indoor lighting. This week, it's been completely dark outside during supper, with the flourescents of the dining hall all we had to see from. I shook hands and gave hugs to this group of people who have been residents with us for the last three months. I wonder what memories they will take with them, how they will look back on their time here weeks from now, months, years down the road. Will they remember us? Did we leave them something memorable?

Walking around on a dark, starry night, I listened to campers cross back and forth, watched flashlights flicker up down, north, south. I thought about how different it feels now to get dark so early, to have these students still so active. I thought about how even next week, the camp will be so much quieter as we settle into this different time of the year. This time when we expect more quiet. This time when we expect more rain. What will it ultimately bring to us? What will we remember? What will have fed us?