This week, the rain returned after our clear sunny Thanksgiving week. It hasn't been constant downpours on the coast--we've seen plenty of clear breaks, allowing us time to get out at lunch time without getting soaked. The new air bringing the rain has also warmed us up a bit too. It seems strange that during a week full of sunshine it was much cooler than the following week filled with rain and clouds. This happens all the time, but it still fools me if I'm not paying close attention to a forecast. 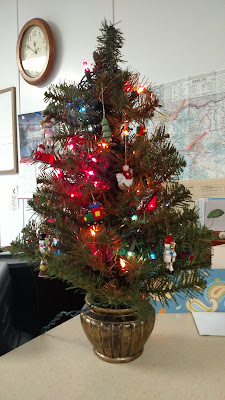 Early in the week, we put up a few Christmas Decorations in the Camp Magruder Welcome Center. We didn't go nuts and put lighted reindeer on the lawn. We didn't plug up the blow-up Santaland or pour fake snow all over the porch. Just a little tree on Angie's desk as you come in the door, and a little Nativity set on the opposite counter where time cards are filled out each morning and afternoon.

There's something about Christmas decorations that make a place feel nice and homey. I don't know exactly what it is, but it makes any office feel a little more welcoming. There is something different than the rest of the year. It's interesting how a little decoration can change our outlook on something. When you walk through a room and see the baby Jesus surrounded by well-wishers, there's a tiny readjustment waiting there, a little reminder of other things out in this vast universe of thoughts to occupy our minds.

This Tuesday was "Giving Tuesday," one of the days in the week of spending following Thanksgiving. We have Black Friday, Small Business Saturday, Cyper Monday, and recently Giving Tuesday has emerged. It's an attempt by the charities and non-profits of the world to appeal to people shelling out holiday money. Camp and Retreat in Oregon Idaho created a few memes for Giving Tuesday inviting people to donate to camp scholarships. Of course, I think sending a kid to camp who might not go otherwise is a great option if someone is looking to give. I shared one of the memes on the Camp Magruder facebook page along with a link to donate to camp scholarships, and moved on to other office work, excited that it might have earned a few kids a trip to camp next summer.

My efforts were pretty disappointing, though, based on the numbers. This post had, by far, the lowest reach of anything I've ever posted on facebook. To compare to other posts, at one point in the day, I changed the Camp's cover photo to a beautiful beach sunset I captured a few months back. That post currently has "reached" 406, with 78 likes, 3 comments, and 1 share. The Giving Tuesday meme put up a few hours before that post has reached 26, 0 likes, 0 comments, and 0 shares. I'm not mentioning this as some sort of passive-aggressive guilt trip on our page followers. I'm mostly just confused by it. Obviously, if I wanted to spread the word about giving for Camp Scholarships on a day that's supposed to be a big giving day, this post was for some reason an epic fail.

There are so many possible explanations for this, so many conclusions that could be drawn. The most pessimistic one is probably just that people don't care about giving. Our page followers just care about pretty pictures. I don't believe it's that simple, because I know a lot of these people are very giving. It could be a lot of other things. Maybe our page followers already gave to the scholarship or some other worthy charity, so the post doesn't apply. Maybe we should have used a sunset picture for our meme instead of two campers. Maybe people who give just don't go searching on facebook to make their decisions. Maybe people are completely overwhelmed by all these pleas everywhere they look for their quickly depleting funds. Still, at the end of the day, I hoped we might get a few more kids to camp, and this just didn't make it happen, for whatever reason. I just really want find a way to spread more of the love and resources we have and are aching to give out to the people in the world who are aching to receive it. There has to be a way to pull these people together.

As I've walked from the office to my home, down the main drive of Camp Magruder, I've seen the wind pick up. White caps on Lake Smith. The spruces, hemlocks, and cedars sway like dancers, and the wind whistles. It's chilling, and on the coast with the ocean air, it can be hard to warm your body back up. I love the knowing that there are buildings nearby where the fire will be lit, where the greenery will be hung, where reminders of the season and our faith are on display. In some of these rooms there is a set of little figures gathered around a manger with a little new born. They kneel around him as we often still do when a baby enters the world. 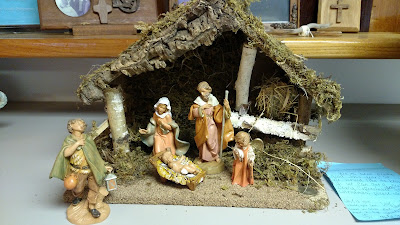 It is Advent, and the church is in this time of anticipation, this time of hopefulness in days getting darker. Christmas means so many different things to so many different people. I can be joyful and stressful, a blessing and a burden. As the wind blows and the rains come. As we find ourselves strapped in this time that's called a holiday, I hope we can find something that will bring and spread joy. I hope we can do this without guilt trips, without obligation, with a spirit of love and sharing. I hope this season, we will fix our gaze on a star that is so compelling to us that we follow it, and it becomes every bit as amazing as it looks. And if facebook posts are not going to be that star, I'm fine with that. I just hope we find that star that leads us to humble stable with a young mother, her husband, and her beautiful child. I hope we feel we have enough time to just sit with them, with the animals, with the shepherds, to share in their joy. A joy we will keep passing along.