This week we asked Resource Staffer Anna Allen to tell us about her summer so far.

This summer has been filled with a lot of ups, downs, changes, and crazy in-betweens; and it’s only half way over. Looking back it has been a lot of new experiences, things I will never forget and somethings that I wouldn’t mind forgetting. I have grown up coming to Camp Magruder as both a camper and a counselor, and this is my second summer on staff. Each of those experiences brought a different view of what camp was. None better or worse than the others; just different.  This summer has definitely proved the point that every experience is different depending on the type of groups you see or don’t see. I knew coming into this job as resource staff that it would be very busy and a lot of hard work, but there was so much that I didn’t think about. There is a lot more effort that needs to be put into things like planning activities, or even just facilitating the activity whether it be challenge course or lifeguarding. It is somewhat silly when you think about it; of course there needs to be a lot of planning to make camp work. But for some reason it didn’t seem like it took that much effort when I was 11 and watching the summer staff go effortlessly from one activity to another.  Maybe the campers think that same way about this staff now. 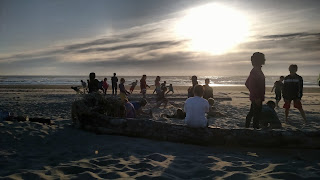 Another interesting thing I notice about being on staff is the connections we make with groups and the groups where there isn’t as much connections. There have been a mixture of groups coming in where they require a lot of activities facilitated by the camp staff, and those groups who just require an hour or two during the day and the rest of the time they are off doing their own thing. There are times when it is nice to have less responsibilities with the groups, because we get to enjoy our time a little more or do some work projects around camp. But at the same time, there isn’t that close connection that is found with the program week camps, or small retreat groups that need a higher presence from the staff. But each group has their own way connecting. One group in particular that I have on my mind, they only required about two and a half hours of leading either boating or swimming and the rest of their stay here was not facilitated by Magruder staff. At the beginning of the week I was a little sad that we didn’t spend much time getting to know the kids or staff, but as the week went forward I found myself having made those connections anyway. Even though I only spent short amounts of time with that group it was still nice to sit and talk to them about what they wanted to get out of that week and what their favorite aspects of camp were. Even though it was just small talk, there was still a connection made.

Another part of the camp experience that is fascinating to compare groups with is the camp store. During the program week camps that Magruder offers, most kids know what to expect in the camp store; some candy, drinks, shirts, sweatshirts, and a couple odds and ends that we have at the time. The retreat groups that come in are sometimes shocked at what we have in the store. One group in particular who hadn’t been to Magruder before was so excited that they could buy a shirt to show off to their friends where they got to spend time during the summer. Even though they had never heard of Camp Magruder before coming, they were still excited to wear something that had the logo on it.

It's also interesting to see how different groups have different levels of awareness in how they clean up. Ever since I was a kid coming here as a camper I always remember being told to leave camp better for the next group than how you found it at the beginning of the week. There have been some groups that take a lot of effort to make sure that the cabins are cleaned, the trash is thrown away, and all of their stuff is picked up. Those groups seem to make it almost like they were never at camp. They want to leave it better for the next group. Then there are groups who don't seem to see all the ways what they leave affects camp.  It is a little disheartening to realize that all of us at some point leave a mess in the beautiful places we love. 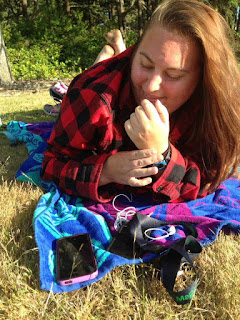 The thing that kept popping up in my mind was however I react I need to remember the mission of Christian hospitality.  If one of the main goals in our mission statement is to spread Christian hospitality, why not lead by example instead of waiting for another moment to have that be true. What good is it going to do to complain about groups that might not even realize what they are doing? I think, for me, the best way to handle is it to take the extra time to clean it up for the next group that comes in so they see the Camp Magruder that I know and love. And to teach groups in the future the importance of why trash should be picked up from the ground, or that cans and bottles go in the recycling bin instead of the trash can. Being frustrated at a particular group isn’t going to solve anything. Learning to forgive and move forward will keep camp a happy place and one that is open for all.

Anna is serving her first summer on Resource Staff after being a Resident Counselor, Counselor, and Camper. She lives in Burley, Idaho, but her heart will always be in Nehalem, Oregon. You can find her this summer lifeguarding on the docks or shooting arrows at archery. If you tip your kayak on Smith Lake, she'll be on her way to pull you back to shore.