This week Camp Magruder entered into one of its fullest weeks of the year. We welcomed the 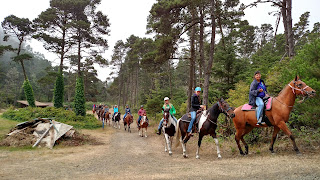 Northwest United Church of God youth camp, which topped out around 220 people. This group has been coming to Camp Magruder for many years and never fails to impress with their attention to detail and hard work put into making the camp a memorable one. During this week campers will ride horses on the beach, kayak, water ski on Lake Lytle, receive dance lessons, and attend a formal banquet along with much, much more. For as many people as this camp brings, they left about 50 on a waiting list this year. It is a testament to the hard work they put into the program.

Due to how thoroughly this camp handles their schedule, we are able to give our program staff and some of our administrative staff time off, which is a blessing in the midst of the hecticness of summer. It gives them an opportunity to recharge and start the second half of the summer off with a fresh battery.

Weather-wise the week has been accented by a stubborn marine layer that parked above us for most of the week. We started off with sunshine and near perfect mild temperatures. Then about Monday low clouds moved in over our little area and took up residence. Often you could drive a few miles down the road and be reunited with sunny summer skies, but in our particular spot the clouds stayed around for nearly the whole week. There wasn't really any precipitation to speak of, but the clouds did keep it rather cool. Several times we even turned a little heat on to take the edge off. 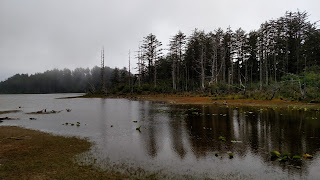 It is a well known cliche in Oregon that if you don't like the weather just wait around, and soon enough it will change then probably change several more times over. It is a good lesson not to get too used to one thing or depend on just one consistently. Our world is full of change, and life is a progression of changes. Growth is an important part of life, and change is part of growth's definition. It can be difficult to swallow the notion that things will keep changing and we must keep adjusting.  I found after we became accustomed to the idea that this week might not be our typical late July week that it didn't seem to phase the campers at all. Sometimes our idea of how something should be is the biggest roadblock to enjoying what it actually is.

Wednesday a United Methodist pastor from Mississippi named Roger Shock dropped by the office. He and his wife, Jan, were visiting the Oregon Coast and, in a passing conversation with a friend, heard there was a Methodist camp nearby and decided to check it out. Hope and I were in the office and talked to them about where we were from. It turned out Roger was born in the town I was born in, and his wife went to college there. Roger graduated from college a few miles from where Hope grew up. They had babysat people we worked with at camp before moving to Oregon. We gave them a tour, talked about the history. They were wowed by the beauty of the place. They bought a few Magruder shirts to wear back home. It is crazy how small this world can seem even with the knowledge of how much distance it spans. 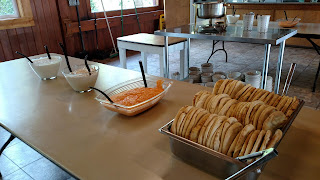 On Friday night our chef Nick put together an authentic Greek meal. I got in early before everyone else, because I needed to get the baby home for bedtime. We munched on pita bread with house made humus and tzatziki. We went to our table near the Carrier dining hall piano where a cabin of girls were practicing a song. We ate this incredible food as they sang. Both of us swayed back and forth taking our time with dinner looking out the windows onto a beautiful backdrop. The clouds had finally cleared and sunlight was beaming through. It was one of those moments you sit back and relax through, because you know it doesn't need to be rushed. Change will be coming around the corner, but lets see this moment through.

This weekend the United Church of God will be finishing out their camp. Be in prayer for their experience with us. We hope your week is a special one.
Labels: 2018 camp life camp magruder change greek food horses july marine layer um camps united church of god united methodist visitors