Last weekend we were host to Choir Camp and College Cares. What a wonderful weekend of beautiful music and energy focused on helping to make Camp Magruder a better place. Our maintenance staff continued to work hard to finish up Beutler and Sherlock Lodges. There are some touch ups to be done in Beutler, but for the most part things are beautiful and in tip top shape.

Staff were also busy in Sherlock getting it ready for Choir Camp. We weren't able to complete the tile floors in the bathroom, the back deck, and some of the audio visual components, but we had enough of the building done and ready for people to use. You can't even begin to imagine the squeals of delight heard in Sherlock as people began to check in for Choir Camp on Friday. It is now a wonderful space to share with people.

We started a new program this year called College Cares. This program was designed for 18-25 year old people who were interested in doing service work to give back to the camping program. The theme of this event was, "Tree of Life" and ended with campers re-locating three apple trees from the greenhouse to the outer part of the garden. These campers worked throughout the weekend in the rain and cold to get several projects done including staking new trails in the gathering space in the center of camp, removing brush from the donkey pen and Koinonia fire circle, turning the compost, hauling donkey poop and bark chips to the compost center, and unwrapping and labeling new program equipment. As a reward for their hard work these campers were able to test out our new life jackets and kayaks.

We were host to the 28th Annual Choir Camp this year. Campers participated in workshops, choir practice, free time, a talent show, worship, and a choir concert. Choir Camp was focused on rest this year with the theme, "Sing Now His Song." In two and a half days these talented and passionate musicians were able to learn 11 anthems including pieces featuring handbells, oboe, and cello.

In donkey news, last week we found out that Caleb does not like cauliflower or broccoli. What a particular treat eater he is. 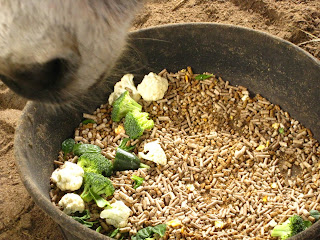