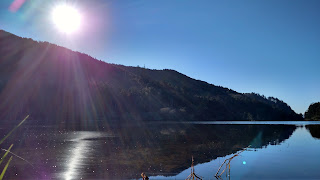 This week was the most beautiful of the year so far on the coast. Blue skies and sunshine dominated the skies, and there was a glow in everyone's face caused in part by the change in lighting but probably also the joy that Spring days like this plant in a person. The robins have increased their song. The jays, crows, and gulls are bouncing around with a greater urgency. No sooner than the day after Easter and the world is more alive.

With the sunshine, the temperatures warmed up to mid-60s by the afternoon each day, which certainly doesn't necessitate shorts, but I've found it too difficult to resist. Even with the chill of the mornings, it's that time of year I'm so ready to wear something different that I'm push the numbers a little bit and let me knees get a little cold, just because I can. At this point in the year, we are ready to go a little beyond halfway to meet something fresh and warm.

The ocean is beginning to back off the beach a bit, ceding a little bit more sand to people strolling and exploring. The past few weeks, high tide has come up all the way to the tree line, and it deposited a lane of large driftwood up and down the coast. It also deposited piles of small jellyfish, which have had a heavy influence on the smell of the air around us. It made visits to the beach much less pleasant, especially early in the week, but you really just need to get upwind from them, and you forget all about it.

So much of attitude is influenced by where we are standing in relation to something else. When you're on a plane, cruising at 30,000 feet, there is no rain--it's always sunny. Then dip below the cloud cover, and you dip into a totally new world. Stand on one side of a pile of dead jellyfish, and you want to plug your nose. Cross the line and the West Wind will take all your cares away.

We've had the types of days that call to you, drawing you out from your indoor projects. On Wednesday it was deli sandwich day at Carrier Dining Hall, and I made quick work of my sandwich and chocolate chip cookie bar, so I could spend some time on the swim dock. I made my way out 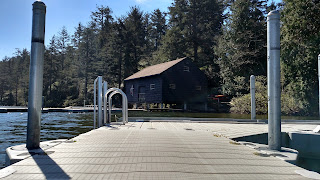 there, unintentionally disturbing the cormorants and ducks who had gathered nearby. I saw a few newts in the lake, returned to mate and leave some eggs. Three eagles had a conversation in the sky, jockeying for position in the spruces above us.

There was so much out there that afternoon, and I felt like I was soaking in all of it. The sunlight of course, but also the wildlife, the blue sky, the light moving warm air, the towering green trees. It was all there pouring into my vision, like the moment you open the blinds in the morning. What a place to find myself in for those 20 minutes of break time, what a motivation to spread the word of this place, to bring more people in to see this and take it in too.

At the end of the day, that Wednesday I went for a sunset run on the beach. I kicked off my sandals under the bench on the South Beach Entrance Path. I ran all the way to Rockaway, crossing a few creeks just before they merged with the ocean. I stopped along the way, as the sun crossed the horizon. Every now and then the tide would come in just enough to rinse my feet and ankles. The weather felt so much like those summer days, when at the end of the day, we would make a quick trip to the beach to bid the sun farewell, standing next to the ocean tide.

When I returned, I found my sandals on top of the bench, in nearly the same position, just on top instead of under. I didn't think much about how they had moved at the time. The next day, though, I discovered an outdoor school student had discovered my sandals and brought them to outdoor school staff member, Bobcat. Since they were described as a lost pair of sandals recovered from the beach and since Bobcat was in need of a new pair, it seemed like providence. Bobcat was showing another outdoor school staffer, Joker, the new sandals she scored, and Joker told her, "Those are Troy's sandals. He went running on the beach and left them there."

Bobcat frantically rushed back to return them, before I got back from my run, but didn't know where to put them since she hadn't originally found them. She ended up putting them almost exactly where I left them. All this transpired in the time it took me to finish my run, and it would have just been one a minor mystery if I hadn't got the story the next day. There is so much going on so near to us that we 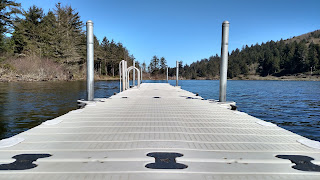 will never know completely. There are just moments that we get a window into the rest of the world if we look intentionally enough or land in the right place at the right time.

These days, thankfully, the weather is compelling us a little more to stop and find those windows to tell us more about the world taking place around us. I hope we gather as many stories as we can, especially if this beautiful weather persists. Even if it doesn't, I hope we still have the motivation to find out a little more about the ones around us, these places we inhabit.