After two weeks of near perfect weather, we were reminded that Spring is not Summer, and that it generally comes with more volatility and unpredictability. Rain returned to our days, and even a few thunderstorms. As I'm writing, it is fairly warm, and the sun peeks through the mostly overcast sky here and there. We are supposed see more sunshine over the weekend with highs climbing into the upper 70s, basically perfect weather for the Oregon Coast. But in April, it can turn on a dime. 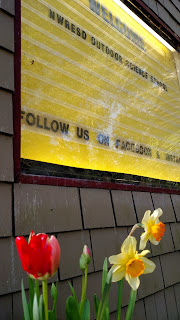 Moving to the coast of the Pacific Northwest from the South, one big weather surprise was the lack of thunder and lightening. In the South, it's not unusual to hear thunder nearly day during the summer. On the coast, it's not unusual to go months without hearing thunder. I've noticed a lot more skittishness for lightening and thunder. It totally makes sense. If you hear it everyday, you're more likely to grow accustomed to it. If it's infrequent, unpredictable, the excitement it causes can be nerve-wracking whether you're scared or not.

Outdoor School had a split week this week, meaning instead of the typical school group who stays Tuesday-Friday, they had two groups: one Monday-Wednesday, the second Wednesday-Friday. It means an early start with less time to get the high school counselors trained, and just a diversion from the normal routine. Outdoor School staff works hard as always, but you can usually see more of a drag in their step as the week goes on. I checked in with Dr. Earth, the Outdoor School Site Director, at dinner and asked how they were doing. He was upbeat as usual, but had a stubble on his face that made it look like he hadn't gotten as much sleep lately. He may just be growing his beard out, but it seemed appropriate.

Angie told me about a night the Outdoor School intercepted a Spring storm, inconveniently on night they were supposed to have s'mores. Outdoor School is typically not averse to braving the weather. They carry on lessons whether it's pouring buckets or beams of sunshine. But, with lightening and thunder in the mix, they clearly had to take more caution. Still, if you've every promised s'mores to middle schoolers, you understand that's a promise they do not take lightly. Try telling someone who's seen a schedule with "s'mores" on it that there's been a change of plans and see how well they take the news.

So, Outdoor School split the group, sent one half to Sherlock and one to Carrier. They stoked fires in the grand fireplaces of each building, and students roasted their marshmallows indoors as the rain came down and lightening strikes occasionally lit up the dark through the windows. Angie said it was a cool sight to see the campers lined up waiting their turn to make the official dessert of camp-outs, inside. To see students enjoying the gooey, sweet sandwiches as a storm threatened outside. It something we proudly boast about working at camp--we have to be quick on our feet, always ready with a Plan B, C, or D. What I've found is so cool about the need to make rainy day adjustments is how those adjustments often create the most memorable camp moments. The moments we recount with friends decades later. The ones that make us realize how close we've become working together. The ones that make us hopeful for life in general.

I remember nights when awful storms killed the hopes of doing anything on the schedule. An entire camp was crammed into the safest, driest meeting space. We had to come up with something fun, something calming, something that might not just pass the time, but make up for the activities we were losing. We would start singing, playing games, even sometimes just hanging out together. Something magical would happen. Campers would get wrapped up in it and begin enjoying it. Some that might be scared or bored or disappointed, would join right in. We were tapping into some kind of special spirit or energy, and they grabbed on and rode it with us. Nevermind the rain. Nevermind the lightening. Nevermind the change of plans. We were doing something unusual. We were making something from scratch. We were turning it on a dime. 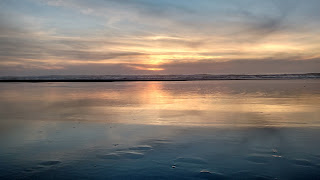 As the week is closing out, the weather has calmed down. The last school buses pulled out this morning, housekeeping got to the weekly work of turning camp over for the next set of guests who will arrive tonight. Outdoor School staff is nowhere to be seen now, either hibernating for the weekend or off on some grand two day adventure. We've gone from raucous to calm, but it will switch again soon enough. We'll do our best to embrace them both. Both are necessary.

This weekend we welcome Cleveland High School Choir, St. Anthony Youth Retreat, and Christ UMC Women. We invite you to be part of this weekend by keeping their experience in your prayers. We'll be back with more news next week.
Labels: 2016 camp magruder lightening oregon coast plan b rain s'mores spring storms thunder